We provide customers with quality products and provide high-quality services

Do you know what is the “Lock Forming Machine”

To manufacture sheet metal pipes and other sheet metal items, requiring the joining of the ends or edges of sheets together, it is the common practice to form longitudinal edges of the sheet metal, and `then to bend the sheet into a rectangular, square or circular tube and interengage the hooks and crimp them in secure, interlocking relationship. It is the common practice of today to form the interlocking hooks or flanges of the edge portions of the metal sheet through what is commonly called a lock forming machine.

Such a machine comprises a series of rollers, which progressively bend and crimp the edge portion of the sheet metal in passing, to form the desired hook.

Due to the complexity of such machines, in the past it has required separate sets of rolls to form each specific type of lock. In other Words, it has not been possible to form a double-seam lock in a machine which is equipped with rollers to form a Pittsburgh lock, and vice versa.

Present day machines equipped with rollers to make the double-seam lock are not capable of forming a Pittsburgh lock. There are machines available which permit the forming of the different locks on the same machine but to do this they must employ different sets of rollers for forming the different locks. Machines with a multiplicity of sets of rollers are substantially more expensive than those with one set of forming rolls.

To the lock forming machine today, it is available to making different locks by using the same set of rolls.

A sheet metal lock forming machine including a bed having a at upper surface for supporting a sheet of material to be bent, a single series of forming rolls rotatable mounted on horizontal axes in spaced relation along the bed, a gauge bar adjacent the receiving end of said series of rolls against which one edge of a sheet of material to be bent is engagable to guide the sheet to and through the rolls, an opening member mounted on the bed and cooperable with the last roll of said series to spread the bent over marginal edge portion of the sheet away from the main body thereof, said opening member including an elongate arm disposed below the upper surface of said bed and in spaced relation below the axis of said last roll, said arm terminating at one end in a back turned hook overlying the arm to project above the l upper Surface of said bed and disposed directly below such last roll, the major portion of said arm extending outwardly from the line of fold upon which said material is bent, and an upstanding pin rigid with said arm spaced from the end of said hook outwardly of said line of fold to dene a conning space between said end of the hook and the pin to retain the bent portion of the sheet on the hook. 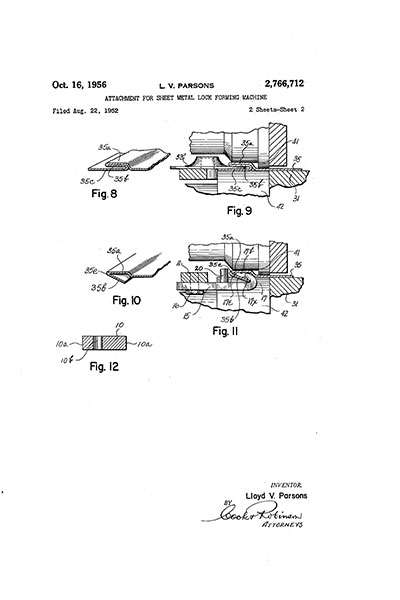 How long is the lead time?